François Hollande is in Africa for the first time as president to begin “a new chapter” in French relations with the continent. Before his trip to open the 14th Francophone summit in which it was not sure that he would attend, he gave a major interview to France 24, where he stated that he would not be sending further troops to Mali but would provide logistical help, equipment and training. The north of Mali militants allied to al Qaeda, have declared this region’s independence since April 2012. Hollande said that it should be Africa that should decide what the response should be. 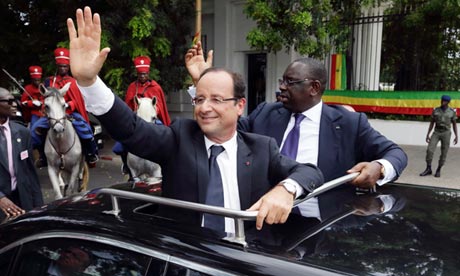 Hollande will acknowledge on his trip the role that France had played in colonisation and the trans-atlantic slave trade. There will also be a focus on growth; many African economies are growing at a faster rate than those within Europe. Hollande will promote French economic interests in the continent, which already accounts for 1/5 of business operating in Africa. Hollande declared in a speech which was well received, that it was time for new, “sincere” relations between his country and the fast-growing economies of Africa. Hollande went on to say:

“I didn’t come to Africa to give an example, or to give moral lessons. I consider Africans to be partners and friends”

The speech was in stark contrast to Hollande’s predecessor Nicolas Sarkozy, who said in a speech that was criticised by many and had members of the audience walking out in protest, in Dakar five years ago that the African man “has not fully entered history (…) never really launched himself into the future.”

The future of the French language will also be debated. Today 220 million people speak French across the world, but by 2050 there will be 700 million French speakers, most whom will be in Africa.

The summit will host 75 delegations in Kinshasa the capital of the Democratic Republic of Congo this week, where the transparency of the presidential and legislative elections that took place in November 2011 have been questioned.